I was delighted to have the opportunity to spend the weekend in the Cairngorms National Park with the boys from the Scotlanders Neil Robertson and Dougie Baird. On Saturday morning we had an early start from Glasgow where we travelled to the Cairngorms. The drive alone up the A9 is one of the more scenic routes in Scotland and a pleasure in itself. Neil and I had a full day of activities planned with Ace Adventures and then also staying at their onsite Ace Hideaways tents overnight.

The Ace Adventure has now been around for about 9 years and run by Jim Davies, who is originally from Tasmania, but moved to the UK about 15 years ago. There is a small permanent team over the winter season and this increases to around 9 during the busy summer season and peak periods. Ace Adventures are located on the Logie Estate, where you will also find the Logie Steading and home Alasdair and Panny Laing still lives. Alasdair’s family bought the Estate in 1924 and the estate has since then been in the family and his son Alec and wife now works on the Estate. They also have part share in the Ace Adventures company, which means that they have an invested interest in the further developments and expansions at Ace Hideaways to attract visitors to the region and Cairngorms National Park.

There are plans to further develop both the onsite Ace Hideaways with more Tents and small hunts, along with expansions to the Disc Golf which are found onsite and in fact recently hosted an international tournament ‘The Moray Open’, which meant there was an opportunity to add a further 9 ‘advanced’ holes to the Disc Golf course. This was a well-attended event and there are plans to expand and improve the course further. There are now 27 holes on the course throughout the Ace Adventure site and available in different levels of availability, either as beginners, intermediate and advanced holes.

When we arrived to Ace Adventures we were met by Nick. As we had arrived a little earlier than planned, he took us around the site and showed us the tent and site where we would be spending the evening. It quickly became apparent was incredibly passionate and knowledgeable he was about the outdoor and his industry. We were shortly after met by Jim who runs the site and activities as part of Ace Adventure who ran over the following days activities. Along with another local family, we were prepared to go on the Findhorn River for the day. 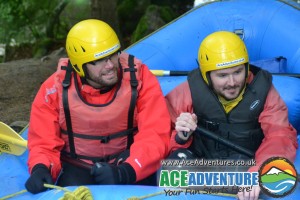 We started off rowing slowly down the river, before starting the exciting day out at a much faster pace. One moment it was peaceful and we were taking in the scenery and birds flying above us and skimming the water, the next moment it was accelerating and a sudden rush takes over and the adrenaline is now properly flowing!

At first I was not too sure what to expect as I had only ever been in canoes and small kayaks. These were 8 seat blow up rafts, with fantastic flexibility and easily manoeuvred around the river. Nick was the one who controlled the boat, Neil and I really just either rowed forward to backwards, when told to do so by Nick. We had several moments where there was a momentary fright, but then picked ourselves up as we knew we were in very safe and capable hands.

The scenery and stone formation when sailing down the Findhorn River as absolutely stunning and I was really upset that I did not have my camera, as the landscape was something that you would never see from either the road or even paths nearby. What also really made the experience so special was when Nick was telling us about the local history and myths from the region going back hundreds of years and it really made you feel you got to know the area. 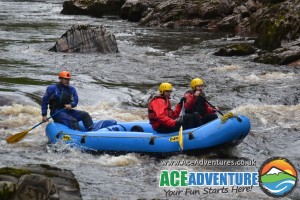 Just before we stopped for a lunch snack, it was time to do the Cliff Jumping, which had not been the top of my list of things to do, as I do not really like heights. This was a very surreal experience and when we first climbed the few meters we were jumping and then got ready, I was just about regretting it. Thankfully I made it and was brave enough to make the jump, although I am sure my body was not too impressed with the sudden and very intense chill from the cold river water. I did not really fancy the top jump, but do recommend that you had a go at least at the first jump, it’s really good fun.

Our day was finished off 8 kilometres about 5 miles downriver, only about 7 miles from the coast. This was on a fantastic little beach, which we had seen a few off throughout the day which was very peculiar. But due to the sandstone that was found along the river, it had over time created several smaller beaches.

This experience was for me such a highlight during my travels around Scotland and I will now always be recommending that if you have the opportunity to take part in this sport, which you take it up! 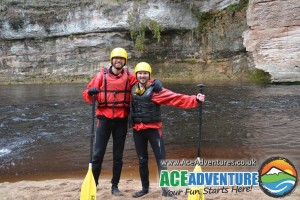 When we arrived back to the Ace Adventure site, we had about an hour to spare, so decided to use the wisely and practice our ‘Disc golf. I have to say I have not played this for a very long time and also, these discs seemed very pro! We tried out the beginner’s course and managed to do all 9 holes in about 45 minutes. We did not manage to get hole in one in any, mostly 3+, but I would like to warn you, it’s hugely addictive and I am really excited about trying it again where possible. 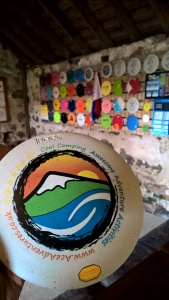 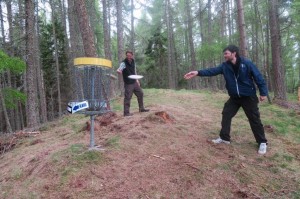 This is one of the small huts that are available for hire onsite and there are plans of getting more of them throughout the site. 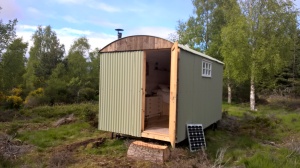 On Saturday evening we were invited to a local Gin Tasting at the Whisky and Wine Shop at Logie Steading and Estate. This was hosted by the local team. The gin we tasted was from the most northerly and distillery in the UK, Shetland Reel Gin. This was only one of the first tastings and it had attracted many of the locals from around the Estate and Speyside.

It was interesting to learn more about this very early stages of their production and also the Scotch Whisky Distillery that will start to produce Malt Whisky in the coming years. On my tasting note, on the nose it was an Orange smell and taste was a pleasant citrus or floral taste. In the blind tasting out of 5, this was in fact my favourite gin, luckily!

I am so pleased I had the opportunity to meet Jim, all of his team and many of the locals. I would highly recommend you paid a visit if in the area for a day out or even better an overnight stay at Ace Hideaways.

All views are my own and should you wish further information or details about what is offered at Ace Adventures please visit: http://www.aceadventures.co.uk/ or at Logie Estate http://www.logie.co.uk/